The second ManageIQ Design Summit was held on June 6-7, 2016 in Mahwah, NJ. We welcomed over 160 participants from around the world (more than double the attendance of the first summit!). There were a total of 26 sessions by 34 presenters. If you missed some of the presentations, or would like to take another look at them, here is the playlist of video recordings of all the sessions, starting with Oleg’s keynote:

From the history of ManageIQ to its future directions, and along this journey the achievements, lessons learnt, plus the behemoth of a feature set resulting from amazing collaboration and integration are just some of the things you can glean from the above content.

If you’d like a visual summary of the event, following is an album on Facebook with snapshots - not only from the presentations but also the “hallway track”, lunch breaks, and the fascinating chess simul during first day’s happy hour. 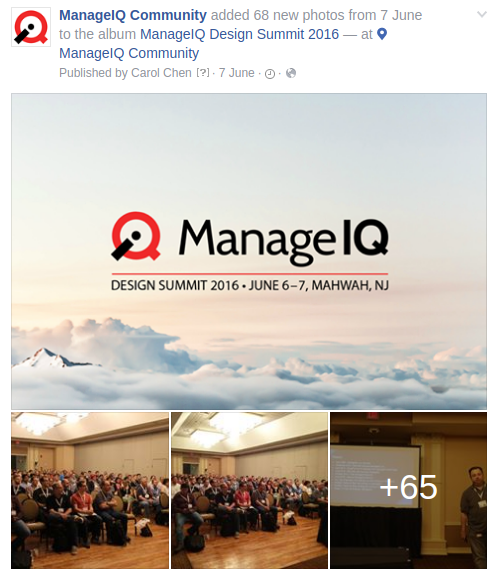 While I tried to capture and document as much of the happenings as possible, git clone urn:homosapiens:cybette hasn’t been fully implemented, and I fell short. Thankfully many of you were tweeting actively with cool commentary and pictures. Check out these tweets with event hashtag #miqsummit2016.

The summit concluded with the official announcement of ManageIQ Darga Release, and the reveal of Max Euwe as the eponym of the next ManageIQ release.

We appreciate all the feedback and comments you’ve provided throughout the summit as well as in the subsequent feedback survey. They will be invaluable in our plans for future events.

A final round of thanks goes to our generous sponsors (Google Cloud Platform, Nuage Networks, Ansible, Red Hat), all attendees, volunteers, community members and everyone who has contributed in one way or other to make this happen!

P. S. After spending a couple weeks immersed in sorting/editing gigabytes of video footage, it’s fun to say ‘I watch videos all day for work’ but there can be too much of a good thing. However, I’m contemplating the idea of a “gag reel” if there is enough interest. Let me know in the comments!