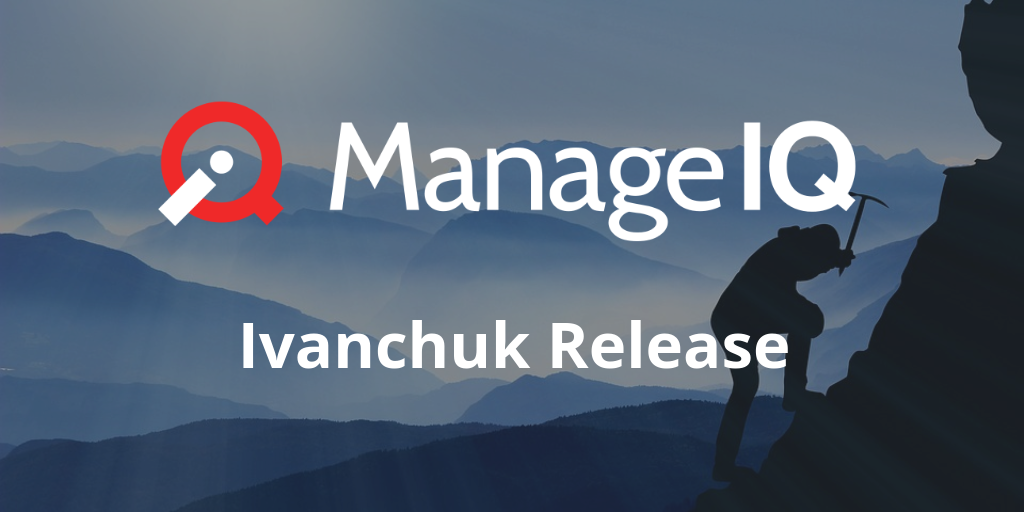 On behalf of the ManageIQ team, we’re delighted to announce the release of ManageIQ Ivanchuk! This ninth release by the ManageIQ team and community is named after Ukrainian chess grandmaster Vassily Mykhaylovych Ivanchuk.

Since the ManageIQ Hammer GA, we’ve had 17 sprints comprising a total of 3967 pull requests across all the ManageIQ repositories, averaging 117 PRs per week. The branching of Ivanchuk occurred in Sprint 116, and we continue J-release work on master.

Let’s take a look at some of the highlights of the Ivanchuk release.

OpenStack - To kick things off, we have an updated dashboard to reflect accurate relationship counts for OpenStack tenants. When using RBAC, a user will now see only the stacks belonging to the tenants mapped to the group, instead of all the stacks from all tenants. Availability zone field has been enabled for choosing the AZ while adding OpenStack Cinder volume. Furthermore, adding infrastructure providers without Ironic service running will be allowed with a warning, instead of an outright failure. This is a supported OpenStack Director setup. As a corollary, a refresh will also not fail with Ironic missing. All these make the management of OpenStack cloud provider more streamlined.

Ansible - We have been constantly improving on the Ansible integration within ManageIQ which makes customization and automation easier. One of the major changes in this release is the switch to fully using ansible-runner, which is an API to run ansible and ansible-playbook. Providing this reliable interface abstraction for Ansible results in much better performance and lower memory footprint. In addition, ansible-runner brings about zone awareness to allow deployment of playbooks in dedicated zones. As you enable the Embedded Ansible server role, it toggles on much quicker since there is no need to install anything. So you can do all the things you were doing before - Service Catalogs, Automate, Control Policies - but better and faster!

User Experience - All the useful features are for naught if they are not usable. Our UXD team has been relentless in improving the user experience for everyone. First of all, if you have a fresh install of ManageIQ with an empty database, or if someone is using ManageIQ for the first time, it may not be clear what they can start with. Now there is a welcome page that prompts the user to add a Provider. The menus are also simplified: “Cloud Intel” is renamed/shortened to “Overview” at the top; the ‘Utilization’ menu item is moved from “Optimize” to “Overview”; and the top-level “Optimize” menu is now under “Overview” as ‘Optimization’.

With one less top-level menu, you might think that the sub-menus get more crowded and harder to track. Fret not, the breadcrumbs have been redesigned to provide a consistent look across all screens and for the user to always know where they are in the hierarchy. This consistency is achieved by moving away from a mix of historical and hierarchical navigation to purely hierarchical navigation. These small crumbs can have a huge impact on usability! Speaking of being more usable, reporting has been enhanced to make it more dynamic, including searchable report results and option for filtering and sorting.

For easier dashboard creation, especially when you are basing it on a similar existing one, you can now copy a dashboard for the same or another group. Tree view performance have improved multifold - as an example, a page with many nodes used to take 3 minutes to load, that loading time has been reduced to 2 seconds. This last bit is more of an eye-candy, but I personally like it a lot - a cosmetic update gives the Login UI and ‘About’ modal a refreshing look. Faster and prettier!

Miscellaneous - Often the unsung hero, the documentation team keeps on updating the user references - something that we tend to notice only when they are lacking/missing. The Ivanchuk version of the docs has already been available since the beta releases. For translations, we have recently migrated from Zanata over to Transifex. Feel free to contribute and help translate ManageIQ to your favourite languages! Then there’s the introduction of Azure Stack as a cloud provider, a new provider which is the on-premise version of Azure. Currently it only supports basic CRUD operations and is very much a work-in-progress, but that’s a peek of what could be coming up in future releases.

As always, there are much more updates from Hammer to Ivanchuk to cover them all in an overview blog post, so I encourage you to download the release images to try them out and see/feel the changes for yourself! To dive further into the technical details, we have the changelog for your perusal. We’re very thankful to all the contributors in the ManageIQ team and community partners for making the release possible!

Visit the ManageIQ Community page to find out how to get involved in the project, and where you can connect with us. Join our discussion forum if you have questions. Documentation and other resources can be found on the ManageIQ site as well. Thanks for your continued support