Hi, I am Satyajit from the ManageIQ Quality Engineering team. I will be your guide in this quick recap of what happened in the PyCon Pune-2017 Python Conference.

Brief about an Event :

This was my second PyCon and first PyCon Pune Python Conference. I had a great time in this PyCon Pune-2017. This year, PyCon Pune was held in Pune at Amanora The Fern Hotels. PyCon Pune is a two day conference where all Pythonistas share their knowledge about Python, Django, Mailman etc. This year PyCon Pune 2017 had 6 Keynote speakers. Check out our twitter feed and look for the #pyconpune hashtag.

There were several booths present at PyCon Pune 2017 which were representing their products/technologies. We had a ManageIQ pod which was part of the Red Hat booth and I was also a part of both at PyCon Pune 2017. People were interested in ManageIQ and wanted to know about “What is ManageIQ…?”.

On the first day of the conference, Sachin Patil, Aziza Karol, Niyaz Ansari, Satyajit Bulage explained what ManageIQ is about and how to start using ManageIQ. Throughout the day, there was a quiz contest going on which was based on Python as well as ManageIQ. The quiz contest got huge responses from various Pythonistas.

On the second day of the conference, we changed the quiz format a little bit. We introduced ManageIQ to the audience with 15-20 mins description by Prasad Mukhedkar. Neha Chough later on asked questions based on same description. We received overwhelming responses for the second day’s quiz contest as well. 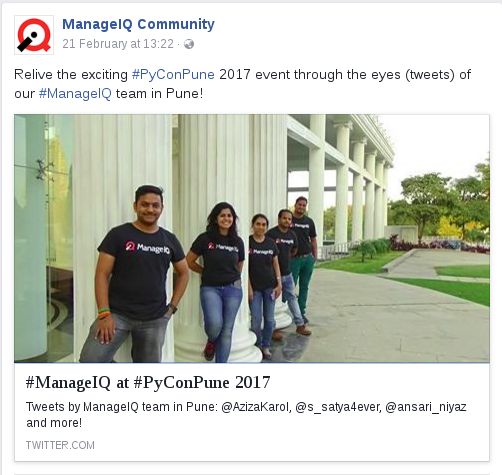 Conclusion of an event :

On that note, we had learned, enjoyed and tried to share as much information as possible about ManageIQ with a lot of enthusiastic people during the two days at PyCon Pune 2017.

Too many people were interested to get more information about ManageIQ, and they shared their contact information with us. In future, we will be planning meetups for them.

This was a quick overview of what have we done in PyCon Pune-2017, but feel free to check out our event pics on twitter moment.